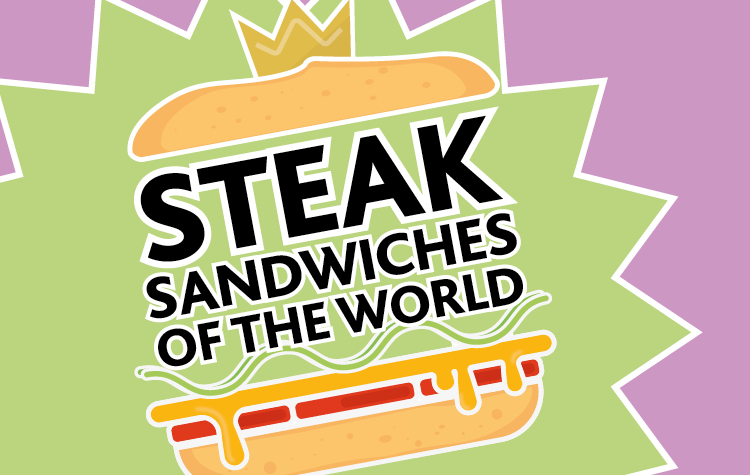 We may think of the humble sandwich as classically British, but they are actually eaten by cultures across the world – from Asia to the Americas. A classic steak sandwich is often regarded as the king of the sandwich world – and by using the very best PGI Welsh Beef in yours it is possible to create a truly unforgettable sarnie, as BBQ legend Chris ‘Flameblaster’ Roberts demonstrates in his new challenge video.

To help get your juices flowing and inspire you to ‘meat the challenge’ of Chris’s competition, here are just a few takes on the gorgeous steak sandwich from across the world…

Influenced by Syrian-Lebanese Brazilian communities, this sandwich is a pita bread stuffed with steak or roast beef, lettuce, tomatoes, melted cheese and za’atar herb and spice mixture. It originates from the city of Sao Paolo and its name is a homage to the capital city of Lebanon, Beirut.

Named after Chilean president Ramón Barros Luco who was a great admirer of this succulent sandwich, it consists of steak and melted cheese served inside a bread roll. Chile is also famed for the Chemilico, which is similar to the Barros Luco but contains a fried egg too.

The sando (short for ‘sandwich’) is renowned across Japan and consists of high quality beef steak from prime Wagyu cattle. The steak is covered with panko breadcrumbs and deep-fried, then topped with a rich tonkatsu sauce and served in a toasted Japanese brioche. Seen as comfort meal for many Japanese, it can be bought from convenient stores as well as high-end restaurants.

The francesinha, roughly translated as ‘Little Frenchie,’ is a Portuguese version of the better known French croque-madame. This sandwich is a proper meat feast with a trio of ham, fresh and cured sausage and a thin steak. It is then topped with melted cheese before being smothered with a base of beer and tomato gravy sauce, and finished off with a fried egg on top.

As the name suggests, the Tripleta includes three different meats which typically include marinated cubed steak, ham and shredded pork or chicken. The bread is topped with fries, ketchup, mayonnaise, cheese and vegetables such as lettuce, cabbage, tomatoes and onions. The sandwich can also be grilled and is usually big enough to be shared between two (or one very hungry person…).

Possibly the most famous steak sandwich of them all originates from Philadelphia, with the Oliveri family often credited as inventors of the ‘philly’ that has now become an icon of American cuisine. Since the 1930s it’s been made by combining thin slices of steak, grilled onions and melted cheese – sometimes you just can’t beat simplicity.

If there is one thing Uruguayan people are more proud of than their football, it’s their food. Chivito is Uruguay’s national sandwich and translates literally as ‘little goat,’ but it actually features churrasco or beef steak alongside tomatoes, olives and mayonnaise. Rumour has it that the sandwich was invented at the El Mejillon Bar in 1946, when a diner arrived at the restaurant one night asking for goat meat (chivo). Even though they didn’t serve goat, the restaurant refused  to lose their customer and prepared this toasted bread sandwich with beef, telling the customer the dish was called chivito. Sneaky…

Last but not least, the Pepito steak sandwich – which originates from Spain but also is very popular in South America – is prepared with grilled steak in a roll with variations of ingredients including cheese, onions, bacon and peppers. The sandwich supposedly originates from Café De Formos in Madrid when the owner’s son Pepito requested a hot sandwich for a change, so the chef griddled him a veal steak and served it inside a crusty baguette.