As Great British Beef Week (23-30 April) celebrates its 11th year, and this week highlights the work British farmers do to support sustainable production practices, Hybu Cig Cymru – Meat Promotion Wales (HCC) pays tribute to local Welsh farmers for their dedication and passion in helping British farming become one of the most sustainable in the world.

Unlike other parts of the world, where water resources are depleted or significant land is used to grow feed, Welsh sheep and cattle are overwhelmingly reared on natural resources – grass and rainwater. With high standards of animal husbandry and pasture land management, family-run farms in Wales have helped preserve the unique landscape for generations, and will continue to do so for generations to come.

Although agriculture is responsible for 10% of emissions in the UK, this is less than the transport and business sectors.  Research shows that farmers’ grassland management techniques in Wales help offset carbon emissions by keeping it below the ground.  This is a positive step toward British farming’s aim to be carbon neutral by 2040.

While the vast majority (80%) of Welsh farmland is unsuitable for growing crops, raising cattle and sheep is the most efficient way to turn marginal land into high-quality food. Grazing the animals on grass and organic heathers also enhances bio-diversity and improves soil health and structure. 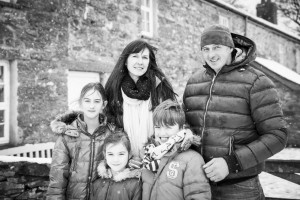 One beef and sheep farming couple who saw the potential in adopting a more sustainable way of farming are Iwan and Eleanor Davies of Hafod y Maidd Farm in Conwy.

In 2014, as a potential decrease in income from farm subsidies was on the horizon, Iwan and Eleanor explored how to lower their farm costs.  They set out to find a breed of beef cattle that could cope with the bad weather and graze on the poor quality grass they had on their upland farm.

The farm, which is registered as a Site of Special Scientific Interest (SSSI) due to a large area of it subject to statutory conservation, has the terrain and grazing conditions that seemed to align with the natural habitat of Luing cattle – an extremely hardy breed originating from the Isle of Luing off the west coast of Scotland – a natural choice and potential solution for the farm.

Since the introduction of the breed to the farm in 2014, (Hafod y Maidd is one of the first farms in Wales to keep the breed) the Davies’ have established and retained a closed herd of suckler cows, producing beef for their catering business and selling stock to other farms.

They fatten the cattle at age when the grass conversion is at its highest, calving at two years and manage the peat bogs by grazing the Luings on it.  It’s a highly efficient system that works for the farm and the environment.

Due to its sweet taste and natural marbling, the Luing’s meat has been highly regarded by Michelin starred chefs.  The flavour and texture is due to the cattle grazing on mountain heather and natural grass with nothing added – no fertiliser or chemicals are used to improve the grass and no concentrates are fed to the cattle.  The Davies’ have more or less returned to the centuries-old farming systems of their forefathers.

Iwan, a fifth generation farmer said, “The success of our enterprise is all down to what, where and how we produce it.  Finding the right breed of cattle that suits our imperfect pastures has meant a minimum of intervention, and in turn we have been able to return to centuries-old farming practices that work with our unique environment and not against it. We are proud to produce nutritious quality meat using sustainable practices – just as nature intended.”

The Davies’ decision to procure the Luing cattle has paid off and now the couple run a successful mobile catering business, selling cooked gourmet Luing burgers and beef steaks at various food festivals, weddings and farmers markets. They also sell their beef direct from the farm and deliver to customers while also managing a 5-star holiday let.

While the Covid pandemic has had a detrimental effect on many businesses, the Davies’ have experienced the contrary.  There has been an increased demand for their beef – with their butcher quite often selling out.

The Welsh way of farming has a very different story to tell compared with some of the intensive and industrial systems found in other parts of the world, ensuring that British Beef continues to be amongst the most sustainable in the world.